Details about an open meeting on Supporting Dyslexia at Home can be found here.

Any pupil who is participating in the authority led trip to Malawi in November should attend a meeting on Wednesday 6 May in Eastwood High School at 7pm.  It is important that all pupils attend.  If possible, pupils should also bring an old suitcase or holdall which can be donated to Betty Cunningham’s Trust.  This will be filled with clothing which will be transported to Malawi. 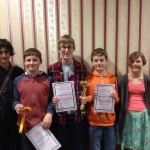 All National 5, Higher and Advanced Higher P.E. pupils who have a locker key must return it by Friday 1 May in order to collect their £3 deposit.  If any key is not returned by this date then the £3 deposit will be used to purchase a replacement key.  Pupils should empty all belongings from their locker before returning the key.

Over the last seven weeks, 20 pupils have participated in the exciting and competitive Delancey Schools’ Chess Tournament every Wednesday evening.   Congratulations to all pupils who have participated in this tournament especially Adam (S1) who was the overall Williamwood Chess Club winner and the only pupil who won every game in the seven rounds. Adam was awarded a trophy and a colourful chess mug to celebrate his success! All of the pupils who participated enjoyed the tournament and were awarded gold spots, badges, a mascot and even a Killer Moves Chess book for their achievement.  Twelve pupils have also qualified for the regional championships Mega final which is held in St Margaret’s Church Hall in Airdrie on the 26 April. We wish them all the best for the next round in the national tournament.  Photographs can be viewed here.

On Thursday 23 April, Williamwood held its annual Graduation Ceremony for the S6 class of 2015. The evening began with an introduction from Mr Inglis (headteacher) and then a motivational speech by Aileen McGlynn OBE.  Aileen McGlynn OBE is a Paralympic tandem cyclist who has won six Paralympic medals and broken a series of world records at competitions around the world. Aileen recently won two silver medals at the 2014 Commonwealth Games in Glasgow. In 2009 Aileen was awarded an OBE for services to disability sport. She is now one of Great Britain’s most successful Paralympians. Musical interludes were provided throughout the evening by the Senior Girls Vocal Ensemble and Sophie Brierton. The evening concluded with valedictory speeches from Head Boy and Head Girl, Andrew Cowden and Aurora McKinlay, and the S6 depute headteacher, Mrs Sinclair.  The Williamwood version of the popular song Uptown Funk starring the S6 class of 2015 and various staff members finished the evening on a entertaining and emotional way. Congratulations to all of the S6 pupils graduating. The evening was well attended by over 900 people. Special thanks to Aileen McGlynn OBE for her attendance and inspirational words and the PTA who generously funded the hospitality at the end of the evening. The Uptown Funk video can be viewed here. Photographs can be viewed here.

On Tuesday 21 April, twelve acts performed in the annual Williamwood’s Got Talent contest. The judges (Mr Getty, Ms Martin, Ms Hutcheson and Mr McLaughlin) were amazed by the high standard of talent from our school which included dancers, gymnasts, singers and a wide variety of other acts. The crowd were also delighted by the staff performance featuring a number of staff members who performed a teacher’s version of the popular ITV programme Take Me Out. The show was hosted by Suzanne and Tristan (S6) and featured voiceovers from the X Factor’s very own Peter Dickson. The judges’ decision was made easier this year through the introduction of text voting, so the audience could also have their say!  First place was awarded to Danila (S3) who performed a dance routine to Chandelier by Sia. Second place was awarded to dancer Stephen (S3) with singer Rachel (S5) being awarded third place. The S5 production team, Jamie , Joe and Euan, ensured that the night was a success taking control of sound, lighting and stage management. They were also supported by former pupil Ross Gunning. The successful event was organised by Mr Henderson and Miss McKindless who would also like to thank the news crew at BBC Scotland and STV Glasgow; the staff at Sporty Kids for allowing them to use their facilities; David Hunter at Moving Films for recording the event as well as all of the teachers who contributed. The evening was well attended and will be available to view on the school website shortly. Some photos can be viewed here.

Over the coming weeks, all S3 pupils will be completing their Pupil Profile in PSHE.  This is an opportunity for pupils to reflect, record and recognise their achievements so far in S1-S3.  Pupils will record their achievements in both curricular areas and extra curricular activities (both within and out with school).  Yesterday, at the S3 assembly, pupils were given a short presentation about their Pupil Profile which can be viewed here.  Pupils will also be asked to select their three most significant achievements which will also be used for their Broad General Education certificate.

The Diana Award was set up in 1999 to act as a lasting legacy to Diana Princess of Wales to recognise inspirational and socially motivated young people.  Earlier this academic year, six pupils  were successfully awarded the Diana Champion Fundraiser award and the Diana Champion Volunteer award for their commitment and efforts in relation to fund raising and to their communty.  The Diana Award is a nationally recognised award and also allows pupils to access a variety of resources and opportunities, if successful.

Pupils must have been completing their activity for a minimum of 10 months.  There are 5 different categories that our pupils (individuals or groups) can be nominated in.   These are:

For young people who tackle bullying in schools and communities.

For young people who run campaigns in their schools and communities.

For young people who raise money for good causes.

For young people who give their time to improve the lives of others.

For a young person whose courageous approach to life has made a direct impact on the lives of others.

We are now approaching the final round of nominations for this academic session.  If any pupil/group thinks that they may be eligible for the Diana Award, they shoud see Mrs Cheyne for more information and the submission forms.  The deadline date for the submission forms is Monday 27 April.

Congratulations to Andrew MacIntosh S3 who participated in the Scottish National Age Group Swimming Championship in Aberdeen at the end of March.  Andrew achieved silver in the 100m breaststroke and bronze in the 50m breastroke.  Well done!

On Thursday 19 March we held our annual Young Musician of the Year competition in the lovely acoustic setting of Williamwood Parish Church. The standard of performance was exceptionally high giving the judges a real challenge on the night.  Congratulations to all pupils involved.  The Junior winner was bassoonist Campbell S3, with joint runners up, pianist Liana S1 and oboist Chris S3. The Senior winner was clarinettist Lewis S5 with bassoonist Andrew S5 as the runner up.  The video can be viewed here.

It’s that time of year again! The popular Williamwood’s Got Talent has returned for 2015. Come and join us on Tuesday 21 April at 7pm in the Ena Millar Theatre.  There will be a variety of fantastic acts to enjoy during the show such as dancing, singing and the highly anticipated staff act! Tickets are £4 and can be purchased in the Street at lunchtimes. Tickets are now on sale.  Buy your ticket early to avoid disappointment!  Please find here a letter providing more details about how to obtain a ticket for this event.

Paul (S6), Lauren, Ross and Lewis (S5) have been part of the vocational programme this year completing a SCQF in professional cookery learning the skills required whilst working in training kitchens, learning how to prepare and present food in a working environment.  The course culminated in a formal meal last week where pupils worked either in the kitchen or front of house serving council members, school staff and family members.  The pupils were outstanding representatives of the school and received much praise for their work.

On Wednesday 1 April at Eastwood House, all of the head boys and head girls from across the authority were recognised for their outstanding contributions to their school throughout the academic year.  Both Andrew and Aurora were presented with a trophy to recognise their success and achievements in Williamwood High School.  Mrs Sinclair, S6 depute headteacher, expressed her thanks and gratitude for the hard work of both Andrew and Aurora.