Congratulations to Eilish Henderson and Ayeza Tariq in S6 who were both awarded the Highly Commended Certificate from the Friends of the Royal Scottish Academy.  Their paintings were highly commended for their emphasis on skills of observation and interpretation.  Well done.  Other painting can be viewed here.

The S6 Young Enterprise company Poser have received a marketing award in recognition of their innovative business idea and creative use of marketing.  The team picked up the award at yesterday’s regional finals which saw over 20 schools compete for a variety of awards. The photobooth company, set up by nine S6 pupils last September, has been an instant hit with customers and was a popular choice amongst the judges at yesterday’s event. The enterprising group have yet to decide if they will continue with their venture beyond school, but they did accept a booking for a rival company’s school prom!

Congratulations to S1 pupil Craig Thomson who was chosen to represent Scotland at the Five Nations Squash Competition. Craig is the number 1 under 13 player in Scotland and is seeded number 1 for the under 13 boys team. Craig will also play for the West of Scotland in the Inter Regional Competition to be played at Colinton Castle in April 2015.  Well done!

Congratulations to the following teams and pupils who all recently took part in the East Renfrewshire Cross Country Championships. Details of the individual and team achievements in the race can be found below:

Congratulations to S3 pupil Andrew McIntosh who won gold medals in both the 200 and 100m breastroke and the 200 individual medley alongside silver in the 400 individual medley in the age 14 group at the SASA West District Long Course Senior Age Swim Championship on March 7 & 8 at Dollan Aqua Centre East Kilbride.  Well done!

Congratulations to S1 pupil Jennie Yang who recently received a letter from Table Tennis Scotland to represent Scotland at the forthcoming Ardo Open in Dusseldorf Germany in August 2015. This is the second year that Scotland will send players to the event.  Good luck Jennie.

East Renfrewshire hosts a variety of activities throughout the year for all ages.   More information on the large variety on offer for Spring 2015 and how to join can be viewed in this please e-booklet:  www.bit.ly/SpringHolsActs2015

We would like to pay our respects to Holocaust survivor Bob Kutner who sadly passed away this week.  Bob lived briefly in Nazi Germany under the rule of Adolf Hitler for a number of months before his family decided they had to leave Germany. This was, for him, the beginning of an incredible journey across Europe, with time spent living in Italy and Nazi occupied France, which finally brought him to Britain where he became an army interrogator. Bob recently gave what would have been one of his last ever talks at the school’s very first Holocaust Memorial Day evening in January this year. This event was organised by S6 pupils Daniel and Cara and their Advanced Higher History teacher Miss Smith, who would all like to personally express their sadness at his passing as they were all inspired and moved upon hearing his incredible story. Bob received an amazing response at this event.  Our thoughts and sympathies are with his family and Bob’s valuable contributions to Williamwood High School will never be forgotten.

The UK Athletic Championships took place at the English Institute of Sport in Sheffield on the 28 February and 1 March with pupils from Williamwood representing their club, Giffnock North.  David (S4) and Rachel (S6) performed exceptionally well to medal in their events where the top athletes in the country were all competing.  David ran a superb race to run a personal best time of 50.24 seconds for the 400m, securing the bronze medal in the under 17 age group. This was a superb way to end his indoor season having already taken the Scottish 400m title.  Rachel also jumped a personal best of 5.97m in the long jump, securing the silver medal in the under 20 age group. Photo can be viewed here.  Having had a slight injury this season, to recover and finish off her indoor season in this manner was a fantastic achievement.  Both athletes are now in hard training getting ready for the outdoor season. 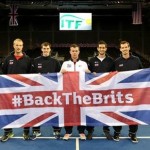 On Friday, a group of pupils visited the Emirates Arena in Glasgow to watch Great Britain take on the USA in the Davis Cup. Britain’s Andy Murray won his match in 4 sets against Donald Young of the USA before Britain’s James Ward won a 5 hour battle against the world number 20 John Isner.  Kirsty Hunter, Erin Ralston, Ross Overdijking, Emma Hunter, Mirin Cowey, Ciara O’Shea, Emma Wilson, Mark Stephen and Douglas Loudon were among the thousands of fans there to cheer on Team GB.  Many members of the audience, staff and TV crews were highly impressed with how smart our pupils looked which earned them some air time on BBC1!

The East Renfrewshire Child Protection Committee is inviting those living, working or volunteering in the local community to come together to find out how to keep children, young people and vulnerable adults safe from exploitation.  More details of the events can be found here:  East Renfrewshire tackles exploitation

We have been informed of some recent opportunities for modern apprenticeships in the following areas:

Additional information can be found using the following link:

The Scottish Youth Parliament elections are now open and run until Friday 13 March. We have seven fantastic candidates at Williamwood High School who have been speaking and you  at year group assemblies. Pupils can vote for the candidate of their choice by accessing http://elections.youngscot.org . To vote you must have a Young Scot card and use the long number on your card to access the website. Any pupil who does not have a Young Scot card should go to ICT 10 on Wednesday 11 March where they will be issued with a temporary number in order to vote. Please ensure that you select the Eastwood constituency. Get involved and choose your representative!

The PTA organises many events each year to raise money for the school fund which is used to cover the costs of extra-curricular activities, to support pupils in hardship and to finance projects such as the Eco Garden.  Last year, the Quiz Night raised in excess of £1000 for school funds.  Please support this event and help us to raise even more this year.

On Friday 13 March, the PTA have organised a Quiz Night to take place in The Street from 7-11pm.  Tickets cost £5 per person and can be purchased from the school office or by completing this form:  Quiz Night Flyer 2015