We would like to thank the advanced higher modern studies class, janitorial staff, Euan Odd and Mr Worton, who all played a part in the organisation of the event as well as S6 pupils, Amy and Margaux, for their musical contribution (viewed here).  A special thank you is also given to Mrs Monaghan from modern studies who chaired the debate.   The evening was well attended with many Williamwood pupils asking questions.  Everyone enjoyed an evening of thought provoking political debate and are already looking forward to next year’s instalment.

Congratulations to the team who represented the school at the national final of the Enterprising Maths Challenge held at the Glasgow Science Centre.  Lewis (S3),  Christopher (S3), Michael (S4) and Alec (S4) took part in various paired and group challenges including a practical round where the boys had to construct a truncated icosahedron amongst other shapes.  Overall, the team were placed 10th out of 63 schools.  Well done!

The P.E. department are now selling sky blue t-shirts and black hooded sweatshirts with the school logo embroidered on to them.  The t-shirts are priced at £8 and the hooded sweatshirts are £15.   Both items come in a variety of sizes and all sizes are currently in stock, including medium.  Sample sizes are available at the P.E. base for pupils to try.  Payment can be made in cash or by cheque to the P.E. department (made payable to ‘Williamwood High School’). 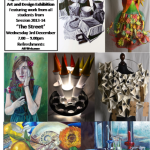 On Wednesday 3 December, Williamwood’s art department will hosts its annual Higher and Intermediate Art and Design Exhibition featuring work from all students from the 2013-14 session.   The exhibition will take place in the Street from 7-9pm.  Refreshments will be provided and all those wishing to attend are welcome. 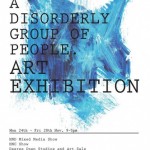 There is an art exhibition taking place in Glasgow Kelvin College West showcasing some of the newest art talent in Glasgow.  The exhibition will run from Monday 24 – Friday 28 of November from 9am-5pm and the opening event will be held on Wednesday 26 from 5-8pm.  The main focus of the exhibition will be HND Mixed Media work and will show a mix of 2D, 3D and installation art works.  For more information, please visit the website at  www.glasgowkelvin.ac.uk/news-events.

Tailor Made Home Care is a family run business based in East Renfrewshire which provides quality care and time to clients in their homes.  If you are a caring and outgoing person, have access to transport and would like to make a difference in peoples’ lives, please come along to the open day on Tuesday December 2 December from 9:30am – 11:30am in Clarkston Halls, Clarkston Road  and from 1:30pm – 3:30pm in the James McGuire Building, 124 Main Street, Barrhead.  Company directors and current members of staff will be there on the day to give you the opportunity to find out more about the company and vacancies available.

Congratulations to the Williamwood Junior Debating Team who were runners-up at last week’s annual Rotary Club ‘Youth Speaks’ event in St Luke’s High School.   Daniel (S1), Cameron (S2)and Angus (S2) gave an interesting presentation on ‘The Ethics of Artificial Intelligence’ and performed very well in what was their first competition.  The senior team were also a credit to the school and gave a good account of themselves in front of local MP, Jim Murphy.  Well done to Euan (S5), Saveera (S6) and Rumaisa (S4).  If you want to be involved in future debates, come along to the Debate Club in room 2.14 on Monday lunchtimes with Mr Ramanujam and Mr Moore.  Additional photo here.

The U18 rugby team narrowly lost their Regional Plate final yesterday against St Columba’s, 22-24.  It was a great game of rugby to watch, with some fantastic tries being scored.  All of the boys have been a  credit to the school and should be very proud of reaching the final.  This was the last competition that most of the squad will compete in before leaving school.   A big thank you from Mr Morrison for all their efforts over the last few years.

Congratulations to Lauren (S5) who was awarded runner up in this year’s Eastwood and Barrhead District Rotary Young Chef competition.  Lauren prepared a delicious menu of tomato and basil soup and Woolton vegetable pie with a WW1 Remembrance theme, which was all served on a table dressed with ration books, poppies and gold (click here to view).  Well done Lauren!

On Thursday 27 November, Williamwood will be hosting its highly succesful Question Time event in the Street at 7pm.   There are  5 excellent panellists who have confirmed their attendance at the event: Ken MacIntosh (Labour), Clare Adamson (SNP), Annabelle Goldie (Conservative), Tommy Sheridan (Solidarity), Charlie Murphy (S6 pupil) and a surprise chairperson.  This promises to be a fantastic night of political debate.  Free tickets for this event can be collected from rooms 2.3, 2.4 and the Social Subjects base.

On Tuesday 11 November Williamwood held an information evening for parents/carers of pupils sitting the new National 5 courses.  Teachers made a series of 20 minute presentations on their own subject and gave advice on the best way parents/carers could assist and support their child’s studies for the new exams.   This was an informative evening for all who attended.  The presentations can now be viewed on the ‘Information’ tab on the school website. 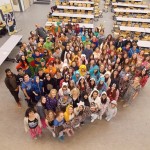 Congratulations to the S6 charities committee who raised a grand total of £362 for Children in Need on Friday 14 November.  The committee held an S6 ‘Onesie Day’ and a bake sale in the Street.   Congratulations to the committee and to all pupils for donating generously.  The catering staff also entered into the spirit of the day, dressing in onsies as well as selling special Children in Need biscuits.  Click here to see our catering staff.