On Monday 15th November, the Williamwood tennis team travelled to Newlands Lawn Tennis Club to play a Scottish Schools Cup 2nd round tie against Grove Academy from Dundee. The tie consisted of four singles matches and two doubles matches, all based on a seeding system. The Williamwood playing order was Keir Campbell (S6), Ross Overdijking (S3), Andrew Thomson (S6) and Ehsin Farooq (S5). The team played extremely well in both the single and doubles matches and recorded hard fought victories in each match, giving a final score of 6-0. Williamwood is now through to the 3rd round of the Scottish Cup.

We are holding our annual Higher and Intermediate art and design exhibition, featuring the work of all students from session 2012/13, on Wednesday 4 December 2013. The exhibition, which will be held in The Street, will take place from 7.00pm until 9.00pm. Refreshments will be provided. <details>  All are welcome.

We wish to thank everyone (pupils, parents and staff) who donated so generously to last week’s appeal for the suffering people of the Philippines. In total, from two pupil bake sales, a staff coffee morning, pupil collections throughout the school day and a collection taken during Thursday’s S5/S6 parents’ evening, we raised a total of £2,325. Thank you.

Last Friday, Williamwood participated fully in the spirit of BBC Children in Need. S6 pupils donated money to wear their pyjamas to school. There were also cake sales, a tombola, face painting and other activities in The Street to raise money for this very worthwhile cause. In total the school raised in excess of £500. Thank you to all who donated so generously. 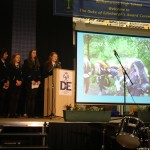 Last Thursday evening, Williamwood hosted its annual Duke of Edinburgh’s award ceremony. At the ceremony more than 160 S4 and S5 pupils received bronze and silver awards. This was a record number for Williamwood. Parents who attended heard from groups of pupils delivering interesting presentations which reflected the effort and commitment required to achieve the DofE award.  The DofE scheme continues to grow in popularity within the school and we now have more than 20 senior pupils on the pathway to the gold award.  <gallery>

To help those affected by the devastation caused by Typhoon Haiyan in the Philippines, the social subjects department has organised a number of fundraising events. On Thursday at the S5/S6 parents’ evening we invite parents and pupils to donate money to a collection. On Thursday and Friday there will be a bake sale in The Street. A bucket collection will also be held and we ask  pupils and staff to contribute what they can.  Finally, there will also be a staff coffee morning during the interval on Friday. Please donate generously to this emergency appeal.

Yesterday more than 170 parents attended an information evening to learn what their children need to do to prepare effectively for their Intermediate 1 and Intermediate 2 examinations in May 2014. Teachers made a series of presentations, each lasting 20 minutes, on their own subject and gave advice on the best way parents could support their child’s studies. Parents were also informed about the work and commitment that are required for pupils to succeed. This was a highly informative evening for all who attended.  <gallery>

Last Wednesday evening Williamwood hosted its annual Young Singer of the Year competition. Over 80 pupils auditioned for a place in this year’s final. The 17 finalists all performed to an exceptionally high standard and there was a huge of amount of talent on display. While the adjudicators were deciding on the winners, the Senior Choir, Junior Choir, Senior Girls Vocal Group, Junior Vocal Group and Senior Boys Group entertained a large and appreciative audience. The winner of the Junior Section was Stephen Allan (S2), with Morven Miller (S2) as runner-up. Stephen performed songs from the hit musicals ‘Matilda’ and ‘Wicked’, while Morven performed music from ‘Hairspray’ and ‘Tangled’. The winner of the Senior Section was Matthew Wilson (S4), who stole the show with his unbeatable performances of ‘Empty Chairs At Empty Tables’ and ‘Fly Me To the Moon’. Sophie Brierton (S5) took the runner-up prize with her haunting renditions of ‘The Voice Within’ and ‘Once Upon A Dream’. Jessica Gaff (S4) received a special ‘Rising Star’ award for her performance of ‘Maybe This Time’ and ‘We Can’t Stop’. Overall a fantastic night was had by all!  <gallery>

We are delighted to report that Jamie (pictured in the centre of the photograph), one of Williamwood’s S4 boys, gained first place in the recent Scottish Lifesaving Championships. Jamie has now accepted an invitation to join the Scottish team that will compete in the National Lifesaving Championships at Sheffield tomorrow (Saturday, 9 November). All staff and pupils at Williamwood wish Jamie and his partner good luck in tomorrow’s competition and look forward to hearing more of their future success in their chosen sport.

All pupils who have received full or half colours for sport will have their individual photographs taken on Tuesday 12th November. It is important that pupils wear their individual sports kit for the photograph, for example Scotland tracksuits, and bring in any medals or trophies they have won. The school sports teams are also being photographed. To check if you are having an individual or a team photograph taken, please click here for page 1,  page 2, page 3. All information is displayed on the first notice board as you enter the PE department corridor. Photograph times will be displayed next Monday morning. If pupils have any questions, please see Miss Heslop in the PE department.

All of our 34 Advanced Higher biology students have just returned from a highly successful three days at Kindrogan Field Studies Centre, Perthshire. Kindrogan is home to some of the most stunning and spectacular habitats in the UK. All students worked extremely hard to plan and carry out practical investigation work for their individual projects, which are an integral part of the SQA assessment. Each left with an improved knowledge of fieldwork skills and a deeper understanding of the analysis of biological data. They also made good use of their wellies and waterproofs!  <gallery>

On Wednesday Williamwood hosted its annual Hallowe’en disco’ for S5/S6 pupils. This was a fundraising event to finance the Isobel Mair School’s Christmas party which Williamwood’s S6 pupils organise. There were many impressive costumes on display, but the best costume winners were Fergus Aitken (S6) who was dressed as ‘Noddy’ and Alanna McGraddie (S5) who appeared as Princess Fiona from Shrek <gallery>.