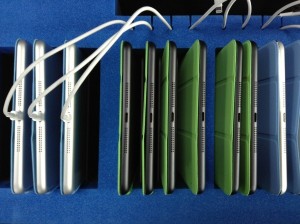 The iPad minis, along with all of the charging, storage and configuration gear, were delivered, setup and explained to the staff and P4-7 on Wednesday, which meant that today was really the first day that we could all get our freshly washed mitts on them.

First thing, I did a sentence writing exercise that is part of my weekly routine. The WALT/learning intention is to write sentences in their jotters and the WILF and success criteria detail all of the things we look for in their writing, which are varied for the different members of P4-7. The questions I asked were about which colour of iPad minis and case they would like and to explain why. The last question I asked was ‘What would change in the WALT/WILF and LI/SC if we changed from jotter and pencil to iPad mini when recording our answers?’ I then explained that when they had managed the jotter work, we were going to try it on the iPad mini. Boy we had some motivated writers this morning. To be fair to the class they are usually very keen, however they were even more keen today.

Next, I opened the storage, charging and configuration case and explained how it worked. I then showed them all of the basics about handling, taking them out and putting them back. I then gave them each an iPad for today. We’re going to assign them their ‘own’ ones tomorrow, as fairly as possible hopefully giving the colours that they want. I then gave a very brief explanation of the basics of switching on etc. as it felt like the children were starting to salivate. I then let them go. It was interesting to observe. They were really focused, on task and also thinking. I learned this by observing their notes and the quality of the answers to the question of what changes from jotter to iPad mini, after some classroom discussion and further questioning. I then let allowed them to explore certain apps during maths, where they would usually be practising their mental arithmetic in pairs or on their own. There was a lot of positive feedback from those who practised their tables using the app Squeebles TT: they were really pleased and motivated by the reward system. I was able to teach Maths groups at the smart board whilst all this was happening. Incidentally, I got the Additional Support for Learning Assistant to work with the iPad mini too – this is a learning experience for all.

Between break and lunch we had some nice visitors who were teaching the class about traditional Scottish music and instruments. They will be returning every Thursday at the same time until the end of term, where we have a plan for a performance near the end of term. What has this got to do with the price of cheddar, I hear your cry? One of the tutors, who plays the accordion, also works in the Apple Store in Glasgow. He knows Garage Band, which got me thinking and scheming. Hopefully life has presented us with an opportunity to make old meet new: traditional music and new technology. Watch this space. 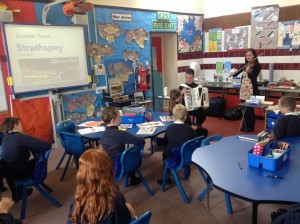 Whilst that was happening, I took some iPad minis through to the P1-3 class, much to the annoyance of my class. I thought it would be great for them to see what all of the excitement was about. I gave them a similar pitch to the P4-7s only delivered on the carpet and in terms that I hope they understood. Whilst we were waiting for all to finish washing their hands, some of the little ones even managed to work out what the i in iPad stands for. After my drill and with extreme care they went back to their places and had a go. They helped and supported one another well, which is important when you consider that some of them have not long turned 5.

Following lunch, our Art Teacher Miss McMichan joined the class, got an iPad mini, and I taught everyone the basics of the app Brushes. We then explored the brush types in detail and also the colour chooser. Next I gave the class an opportunity to discuss different subjects that we could then ‘paint’. The best suggestion was one which built on prior learning about Roy Lichtenstein. Miss McMichan then set the challenge of using the picture below as the subject and gave them 20 minutes to use Brushes. Miss McMichan and I had a go too: we all learned. The level of focus in the class was quite intense. It was silent for most of the time. When the time was up we left the iPad minis at the table where we were seated and went and had a look at one another’s work.

When compared to their general art work, the quality of the Brushes compositions, given the time and experience of the medium, was rather good, and I’m not just talking about mine. We gave feedback on one another’s work and drew some named lollipop sticks out and those got to choose different class mate’s or teacher’s work to share on the board. The nice bit about Brushes is that it records all of your strokes and plays them as a video: most useful when reviewing other’s work as you can see how they built up their image.

That was all for the iPad minis today. The kids absolutely loved them. So did the staff. Following some good post match analysis, I am hoping to work further with Miss McMichan and in turn, the other visiting specialists for Music and PE, as there are a lot of opportunities for learning.

What a day. We also had a teacher from another school visit this morning to observe our Maths Teaching. It was really nice to see Mrs Davies again. Oh, and we even managed a spot of Quadblogging and cycled to and from work.

A couple of points:

– WiFI is in the pipeline, which is why I can’t share the work with you yet, but we will. I’ve got a couple of time lapse videos to share too, from today.

– When we get WiFi on the go, I’ll get the pupils to share their learning, so I’ll be able to give you peace rather than War and Peace.

– Thanks again to Alan Cameron and Steve for their efforts of getting this amazing package of technology together for us yesterday.

This week it is our turn for comments from our fellow Quadbloglodytes in New Zealand, Canada and Devon. Welcome to our blog, it’s been fun reading, commenting and receiving replies so far. We hope you have fun investigating our work.

Here’s a picture of our class taken on Tuesday: 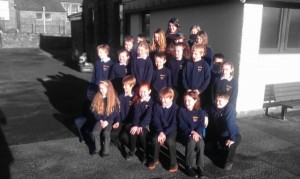