When Bessie Watson’s aunt died from tuberculous, her concerned parents encouraged her to take up the bagpipes. They hoped that playing the pipes would strengthen their daughter’s lungs and protect her from the feared disease. Bessie became an accomplished piper. She volunteered to take part in an historical pageant which was part of a political march through the centre of Edinburgh in 1909 organised by the Women’s Social and Political Union. To join the pageant, Bessie and her mother had joined the movement aswell.  Initially, Bessie was most interested in being part of  the spectacle, and the cavalcade of tableaux that celebrated ‘What women have done and can and will do’. 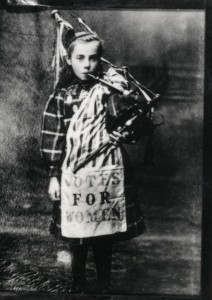 However, Bessie soon became involved in the WSPU’s aims and an avid supporter of the Suffrage movement. A couple of weeks after the march, she was delighted to meet Christabel Pankhurst, the captivating leader of the WSPU. Christabel Pankhurst gave Bessie a brooch as a memento and thanks for her participation in the pageant which made Bessie feel that, although only nine years old, she had become a real Suffragette.  Bessie continued to support the Suffrage movement and would even go after school to play her pipes outside Calton Jail so that the imprisoned Suffragettes would know people were thinking of them.

In this week that celebrates International Women’s Day share Bessie’s remarkable childhood with your class. You’ll find the full story in her Life in a Box in Whose Town? and an exhibition on Capital Collections.

Whose Town? was supported by the National Lottery through the Heritage Lottery Fund.

Go to Whose Town?

Find Whose Town? on Glow