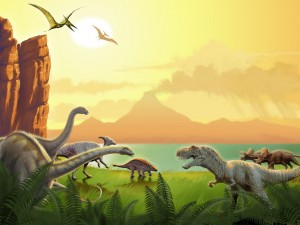 Long ago, before there were any humans, there were dinosaurs. Dinosaurs lived on the earth for over 165 million years but then they strangely became extinct, this means they all stopped living.

There were lots of different kinds of dinosaurs that lived at different times. Some were huge and some were much smaller. Some dinosaurs could move quite quickly on two legs. Others walked on four legs in a slow and clumsy way. Some dinosaurs could fly. The biggest complete dinosaur found by historians is the Brachiosaurus. It was about the length of two large school buses. The smallest dinosaur, the Compsognathus, was about one metre long and slightly bigger than a chicken.