Maths Week Scotland was setup by the Scottish Government with an aim to improve the image surrounding the subject and to promote positivity around it. It involves everything to do with mathematics and encourages people from all backgrounds to take part. Forfar Academy was not the only school to take part with the event being promoted throughout communities in the country.

The week started on the 11th of September through until the 17th with a variety of activities carried out, some bigger than others. Forfar Academy is trying to get away from the negative image of maths with “great gusto” according to the Principal Teacher of Mathematics at the school so they put lots of effort into the week.

The local community got involved with the local church knitters coming into the school for an afternoon of maths themed knitting and staff wore Maths Week Scotland badges made by senior pupils. Pupils made Menger cubes which were sponsored by ScotRail and created pencil models. The school library even got involved with maths related fiction put out on display such as Matilda. The science faculty created their own maths themed treasure hunt and mathematical puzzles were uploaded to twitter for people to work out and answer. The creativity didn’t stop there with pupils also creating Dodecahedron’s out of post it notes. Magic even got involved in the week with Mike the magician giving a “highly entertaining” mathematical and magic interactive performance.

The school held a parental information evening regarding the event and used the opportunity to promote mathematical resilience. Pupils loved the activities so much, they plan to take part in the week next year making it bigger and better. 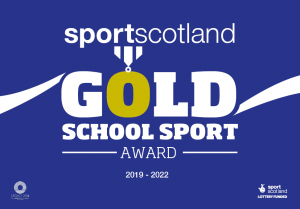