Well done to all of the boys who attended the recent Angus Rugby Festival and represented Arbroath High School. Although not winning many games the team played very well and improved as the day progressed.

A group of S3 pupils were selected to attend a talent ID day for Scottish Athletics. The event was called ‘Playground to Podium’ and was a chance for Scottish Athletics to draw in talent from other sporting areas. The pupils selected were Finn Sutherland, Kailin Brannigan, Callum Beattie, Jakub Proctor, Hannah Robb, Kate Fraser and Georgia Ferrie. The athletes were involved in running, throwing and jumping and all performed exceptionally well winning many of the group stations. The next stage in this process involves inviting back the top athletes to work with specialist coaches.

More success for our school netball teams as one senior team and three further teams made up of pupils from S2 and S3 travelled to the Bells Sports Centre in Perth to participate in the Tayside and Fife Schools Challenge Cup.

The format for the junior competition was a round robin with two groups. Both the AHS A and B teams topped their groups with the C team placing 3rd and narrowly missing the semi-finals. AHS A and B then won their respective semi-finals to set up an all AHS final which was of a very high standard.

The senior girls also played a round robin winning two group matches and then winning the final to take the senior title.

Congratulations to the AHS golf team who won the Angus League. The team consisted of Kyle Gibson, Stephen Shepherd and Jake McWalter and they were undefeated throughout the competition

Not content with one national medal the boys then added a bronze in the 4 x 50 metre medley relay, with Luke swimming backstroke, Taylor on the breaststroke leg, Nathan swimming butterfly and Blair taking the team home on freestyle for a place on the podium.

Congratulations also go to S1 pupils Ally Morrison and Ashley Thomson on their performances at the recent Angus Schools swimming gala. Ally took gold in the 50m Backstroke with a time of 35.28 while Ashley also won gold in the 50m Butterfly in a time of 33.42.

ArbroathHS  fought back from being a goal down at half time to deservedly win the Angus Cup, in a hard fought match at Station Park. Despite having most of the play in the first half Arbroath went behind just before half time. However Callum Beattie equalised early in the second half with a vicious swerving drive from a tight angle the match went to extra time.

A penalty shoot-out was looming, but Kerr Waddell flighted a long-range dipping strike beyond the Forfar goalkeeper to snatch a worthy win for the High School. Finn Sutherland had already gone close with two earlier chances and with excellent performances from Gareth Mowatt in goal and Harris Carnegie and Liam Sime in defence the Arbroath goal was rarely threatened and the win was more comfortable in the end than the score suggested. It was a satisfying end to a good season.

It was a season when the whole squad excelled: Jonathan Bastow and Bailey Menmuir were never overwhelmed at full back and Nathan Sinclair and Ross Paterson were consistently effective in midfield, beside the powerful and creative Waddell and Beattie. The substitutes played well when called to do so, with Tommy Yule’s appearance at Bannerman HS being particularly remarkable. Congratulations to all and bring on next season. 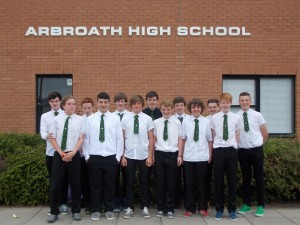 Congratulations also go to the S1 boys football team who beat Arbroath Academy 9-2 in the Angus league. And then went on to defeat Webster’s HS to become League champions.

For the nineteenth time in twenty-one years, Arbroath High School was the winners of the Angus County Sports. This represents an astonishing, sustained level of success given the competitive nature of the event between the eight Angus secondary schools and the relative sizes of the schools. In addition to the overall success, the team from AHS won the S2, S3 and Senior girls categories as well as the S3 boys.

On Friday 14th June, along with eleven other schools from around Scotland, Arbroath High School performed at the annual Be Your Best Foundation Global Rock Challenge Scottish Final at the Caird Hall in Dundee. This global event is run all around the world, from Australia to Germany, with the aim of providing school pupils with the opportunity to experience the natural, adrenaline fuelled high from performing in a professional venue. The competition has an overall message of drug awareness and healthy lifestyle but it also manages to help to building creativity, independence and self esteem in young people around the country.

This was the second time the Scottish final had ever been held and Arbroath High School were attending as defending champions, having won the inaugural final with their piece ‘The Wolf’ in 2012. Nonetheless, this was still only their third year in the competition. As a relatively new team, they were excited to see if they could continue their success. They were competing against schools from across Scotland with teams from Highlands, Aberdeenshire, Angus, Dundee and Perth and Kinross all represented.

Taking part in Rock Challenge takes a lot of time and effort from staff and pupils with everything from costumes to set and dancing created as a team effort. Their piece ‘Doomed’ was based on the story of the lost city of Atlantis and the costumes and set were built to represent an ancient Greek City being attacked by the elements before sinking to the bottom of the ocean.

Fortunately, their efforts and hard work were deemed well worth it by the judges at the Caird Hall when they awarded ‘Doomed’ overall 2nd place, narrowly losing out on the top prize to Mackie Academy from Stonehaven. They were also commended with special awards for make-up, hair, performance skill, inclusion, press coverage and drug awareness. 3rd place went to Fraserburgh Academy, closely followed by Westhill Academy with Kinross High School in 5th.

The Arbroath High School team now move on to preparing for next year and hope to add significantly to their number. They lose quite a few of the seniors this year as they move on to University and further employment so they hope to bring in some fresh new faces. They will be holding a dance school in Showcase the Street on 9th August for anyone aged 10-17 who may be thinking about joining the Rock Challenge team. It’s a great opportunity to meet some of the team and to see if it’s something you might enjoy. The classes are from 11am till 3.30pm and will cost £5. Anyone attending should bring a packed lunch.

A huge number of people were involved in helping to make this such a huge success, but the team would like to express particular thanks to Buchan Embroidery in Peterhead for their continued sponsorship. They would also like to express their thanks to Angus Council, Northern Tool Gear, Asda, GSK Montrose, Pepo’s and Strathmore Vintage Vehicle Club for their financial support over the years. 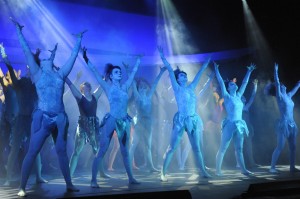 Local Chef Garry Watson and Hospitality pupils from Arbroath High School recently picked up a Partnership in Excellence award at a prestigious event hosted by Angus Council.  Sophie Martin S4 and Rebecca Ramsay S3 attended the event held at the Carnoustie Golf Hotel with their Mentor Chef, Garry Watson from Gordon’s Restaurant in Inverkeillor.  The award recognises “a specific example of partnership working…, which has made a significant impact on the learning of young people and has made a lasting contribution to the life of the school”.  Garry has mentored pupils from the school during the last three years, increasing their skills and awareness of the Hospitality industry to prepare them for local and national cookery competitions. Both girls have won the local and regional rounds of Springboard UK’s, Future Chef Competition and have placed highly in the Scottish heats in Glasgow. He has made strong links with the school’s Home Economics department and has delivered workshops to whole year groups as well as Teachers and continues to support and give free advice in matters related to his profession. The partnership award was as a result of being in the short-list of five nominees from over 100 worthy applicants and Garry and the school are delighted to receive this recognition. Mrs Forbes, who works in the Home Economics Department at the school, commented “Garry has been a fantastic asset to the school and the time, effort and sponsorship he provides each year to the deserving pupil is immeasurable.” 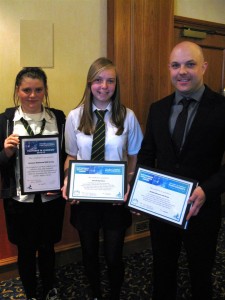 On the 5th of June a group of 12 pupils from Arbroath High School travelled to Albi in the South of France to meet their French ‘pen pals’. Our pupils started exchanging letters earlier in the year as part of their ongoing work within the Modern Languages department. However, this is the first time there has been an exchange of this kind organised by the school and it represents an exciting opportunity for the pupils involved.

The pupils stayed with the families of their respective ‘pen pals’. During the week they were given the chance to take part in a wide range of activities which related to the work of other departments in school, with sports like kayaking in the river Tarn, art appreciation through a visit to the Toulouse Lautrec museum, and further visits to the local cathedral, a coal museum, the Cap’ Découverte theme park and a museum dedicated to the famous explorer Lapérouse who appears in the S2 History course at AHS. The pupils also had a chance to spend a day in Toulouse at the Cité de l’Espace theme park.

One additional feature was the chance to attend a French school and follow the timetables of their ‘pen pals’. This proved to be an enlightening experience for many of our pupils – not the least significant part of which was in learning that the school day begins at eight am and does not end until five pm!

Most pupils involved have already commented that their French has improved a lot and that they are more confident in using the language. Overall it was a very positive experience and now we wait for next year and the return visit to be made by the French ‘pen pals.’ 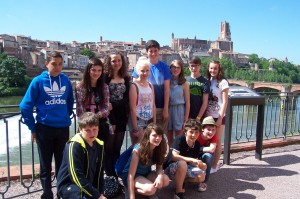