. She was a poet, actress and author.

Before the holidays P5,6,7 did paintings of one of the scenes of Maya Angelou’s famous poems. The poems we did were “I know why the caged bird sings and I will rise”. We had to paint things that were lines in one of the poems and we also used collage that looked like the things in her poem. 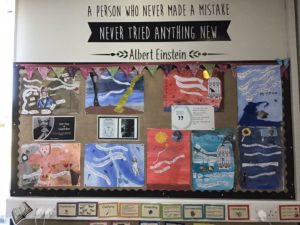 Racism is when someone treats someone differently because of the colour of their skin, their culture and the country they’re from and we have learnt about this because we think it is important to know what racism is and the effects it can have on people.