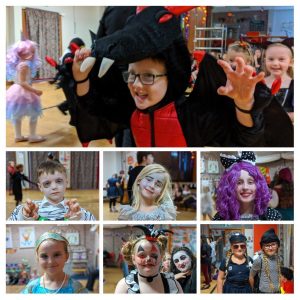 On Halloween our school held a Halloween disco in the afternoon and a pumpkin carving competition in the morning, Almost everyone in the whole school brought their pumpkin into school. When I got into school I went to the hall to enter my pumpkin but I felt like I was in a swimming pool of pumpkins, some scary some nice some freaky some cute I also felt excited and nervous at the same time. I left my pumpkin on the table and went to class and after ordering our lunch and filling our water bottles it was time for the pumpkin competition so as we all hurriedly and excitedly went down the stairs sat in the hall yapping about if they would win. Then all of a sudden Mrs McDonald stood up and entered the hall as she loves the pumpkin competition. We all gave a big drum roll and she announced the winners, I can’t remember all of them but I remember primary 6 winner it was my friend Robyn Logan  and primary 7 was another friend of mine Harmoni  Edwards.

Then when the afternoon came round we got dressed up in out costume as it wouldn’t really be alright for us to spend the school day in our costumes, some brought make-up and some brought specific accessories for them to wear.  FINALLY it was time for the disco. we all trembled down the stairs again and when we got in the lights were of and the music was on so we all went to our friends to party. After about half an our of dancing Mrs McKenzie made us play a game were we where in groups and 1 from a group was a cat and another was a mouse and the chase began, so after the music was on and musical statues was a go. Then my favorite song came on dance Monkey!  After the disco it was home time so we all went on the bus or walked so that was Halloween for you.