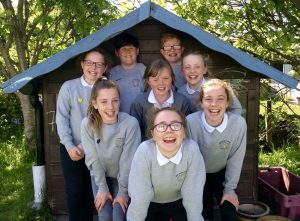 This year the P7 leavers assembly based on Alice in Wonderland. P6/7 had to read the book and do voice overs of the poem Jabberwockey. The first song  of the leavers assembly is called Shine and the last song is called Wherever I go, in the middle is the lip dub, which is the song Build me Up Buttercup. There is also the films of all the P7s talking about their time at Port Ellen. We had to do lots of filming this year like the teaparty.   Everyone had to dress up and act like the characters and eat lots of cake which was good fun!