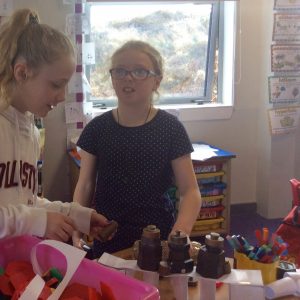 As part of our Engineering project this year we wanted to show we could get better at engineering.  At the start of the project we had to build bridges, and ours were made from straws and did not work well or hold a lot of weight.  We did the bridge building test again to see if we had improved, but this time we were only allowed to use paper to build our bridges. The point of it was to try and engineer a bridge that could hold a calculator, at first it was quite hard to make a bridge that could hold one. Me and Rowan decided to apply what we had learned in maths about 3D shapes and  put cylinders under our bridge so that it could support the weight of a calculator, a lot of the bridges ended up being able to support a lot more than a calculator. Our bridge managed to hold 6kg in weight!  I was surprised that it could hold that much because it was just paper and tape, eventually we over tested it and wrecked the cylinders on the bridge. Everyones bridge could hold at least a calculator and some bridges could hold more, our bridge could hold the most in the class which I was surprised about. We applied our engineering knowledge to building the bridge and this showed how much we improved!