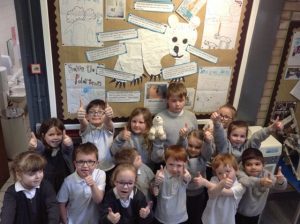 After Katie suggested to the class that we adopt a polar bear, P1/2/3 have not raised the £50 required from selling popcorn and adopted a Svalbard polar bear.  We’ve named him Snowball.  We have learned that polar bears are becoming endangered due to global warming.  Less ice means that there is less of an area for them to hunt, they have to swim longer distances between ice and they are coming into conflict with humans when they approach towns in Alaska and can get shot.  We found out that they have polar bear jails where they can catch them and then release them back where it is safer and not near where people live.