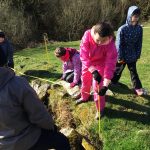 Rob showed us how to do the geophysics; there was machine and that went into the ground with electricity to see if they could find anything else about the land around the Chapel. The geophysics 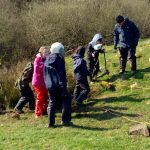 worked by sending an electrical current through the ground and if there was a higher reading then there was a rock under the ground this is because it takes more energy to get through the rock. If there was a lower reading that means that there would of been water because it didn’t use lots of energy to get through it. To use the geophysics you would stick both spikes into the ground and wait for a beep then move onto the next spot a certain distance away. We were all glad that people from the University Of Reading to come over and help us as they were very interesting and taught us lots.  The data we gathered from the geophysics will actually be used in the final report on the site which is very exciting. 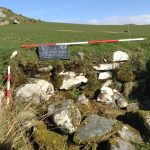 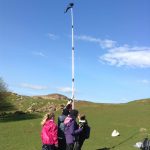 the camera on and you have to make sure that the camera is screwed on properly so it won’t fall off. The archaeologists helped us with all of this. We also made a documentary and it was about what we were doing at Kilbride Chapel and we had to use a radio microphone to record. Showing us how to do things properly is one of the reasons Islay Heritage is so good.

The last activity we did was making an accurate scale drawing of the chapel with Darko. We did this by measuring all the sides and scaling it down properly on graph paper with a scale of 1:50. The picture 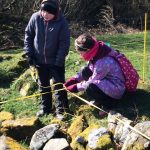 looked really cool and showed us what the chapel looks like-it had really thick walls and was a lot smaller than we thought it would be.  We checked our drawing was correct using a GPS positioning pole.  We learned lots of new skills and at the end we got to see the results of the geophysics in school and it showed that there might have been an enclosure around the chapel and we were the people who found out that evidence which was very exciting!  We then drew pictures of what we thought it might have been like in the past before it fell down.