On Monday 13th March we had a drone club after school. Nearly everyone in my class went to the club. The club was for primary 4 – 7. The first thing we had to do was program the drones to make them fly around in a square. We used the Ipad  to program them.   The first time we tested it some groups made it do a flips and turns. Some of the drones wheels that protected us from it even fell of. After that we got a shot of spheros that got controlled on an ipad .  You had a choice of changing its speed or colour . At the end of the club we got to see a very small computer about a half the size of a  remote. Everyone go a shot of tinkering with it. 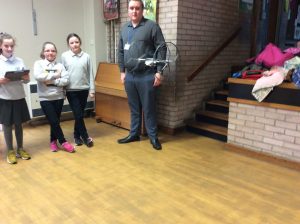