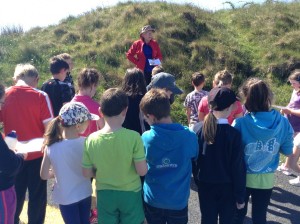 On Wednesday 1st June our school invited Port Charlotte and Bowmore Primary School to come do Orienteering with us. We all went to the hall were we got sorted into four different groups blue, purple, orange and green. We were all mixed up so there was some Port Ellen Pupils, Bowmore Pupils and Port Charlotte Pupils in each group. After that each group was sent with a teacher. Every teacher had their own orienteering stage. We also had Lynn Walker from Scottish Orienteering to hep  us and we also had Rona Young, a P.E teacher that helped us. The courses we had were Make your own course, How to use a map / tour around our playground, a maze and a course with different stages. Everyone had lots of fun. 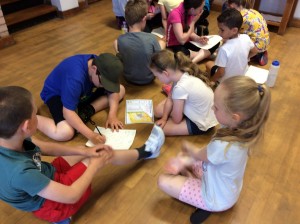 Then today everyone was split into their Port Ellen school houses (Nave,Texa and Orsay) and then we were split again into teams of 3,4 or 5 and we were each given a map and an electronic dibber (which we also used in the maze). One person in each team would go to one of the tags located on the map, log it using the electronic dibber, and then when they came back to the team they would pass the map and dibber to the next runner.   They had to do odd and even numbers in turn and the big ones helped the wee ones to find the points.  At the end we all gathered in the hall and we were told which house won the competition. Texa was third, Orsay was second and Nave was first. Everyone had lots of fun and everyone gave it their best shot.

OUT AND ABOUT ON ISLAY

Hello, We live on the Isle of Islay and here at Port Ellen Primary School our project this year is orienteering. We are wanting to develop orienteering course online that people in the local community can use in order to keep everyone fit and healthy by encouraging them outside.