A few weeks ago, we went to play rugby at Barcaldine Primary School. We played rugby with Appin and Barcaldine. We had two separate teams: P4 and P5 against each other, and P6 and P7 against each other. We met some people from Barcaldine (they were nice). Cormac and Fergus were on the same team against Alasdair’s team. Cormac and Fergus’ team won 1 time and tied 10-10 every other time J

A few weeks later, we returned to Barcaldine Primary school, with Appin, for Sports day. There were seven stations and one rest station. Also, we made flags for our teams: Alasdair and Fergus were in the Jelly Fish team and Cormac was in the Lobster team (there were 8 teams in total). The funniest part of the day was when we finished the flags and skipped around the pitch for the parade (the parade was great fun). in the afternoon, we did races: running, relay and 3 legged race. Fergus and Kristian got 1st place, for their age group, and Cormac got 3rd place (in the straight races). Fergus and Cormac got 3rd place in the 3 legged race. At the end of the day, the parents raced and Robert got 1st place. 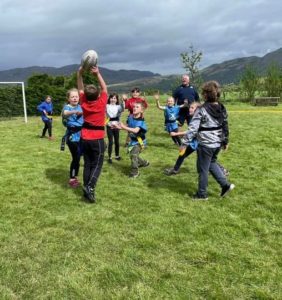 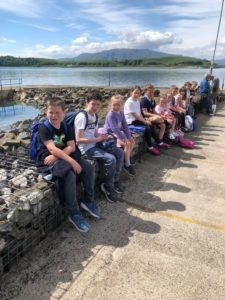