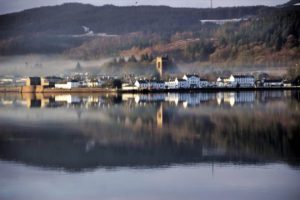 I returned to Inveraray Primary in August 1998 as Head Teacher. Annabel Morrison (MacMillan) HT had passed away suddenly on holiday in Maderia in April 1998. The school had been through a dramatic time losing their beloved and hugely respected, larger than life HT and the job ahead for me was to respect the legacy she left but to move the school forward. I am not a person who believes in the super natural but on the day I began working in Inveraray as Head Teacher a vision of Annabel appeared who smiled and softly said “you will be fine, the school is in good hands”. This unique special moment stayed with me for a long time and when the going was tough I always remembered that day.

Being Head Teacher at Inveraray Primary was perhaps one of the most special times in my career. I worked with an amazing team comprising of Fiona Hamilton, Lynn Sinclair (Kidd), Keeley Hathway, Simone MacAdam, Linda Leyland, Rona Young as some of the teaching team.  Tom Paterson, Janitor, Catering Team, Catherine Sinclair, May Kennedy and Irene Campbell, Jacqui MacDonald Classroom Assistant and Karen Stewart Clerical Assistant were an amazing support team. 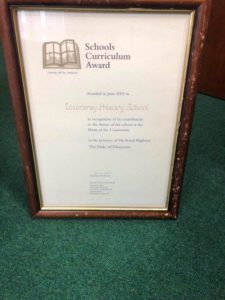 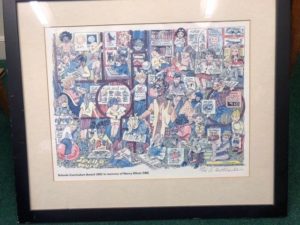 During my period of headship at Inveraray Primary the school became a leading educational establishment in relation to environmental education and creativity in learning.  Many awards were gained and the school attracted national and international visitors.  Inveraray Primary became known as a high attaining school with an innovative curriculum and outward looking vision. The school gained the national Schools Curriculum award and what an adventure taking the P7 pupils to London to receive the award at the Tate Modern. The school was frequently asked to contribute at national conferences and we took part in many authority and national working groups related to leadership and curriculum development. Our position as one the first schools in Scotland to be awarded the Green Flag made us a popular school to visit and share our expertise. We built up contacts both in Scotland and in other parts of the UK. One outstanding memory is a staff CPD activity where we as a whole school spent the first week end of the holidays visiting the famous Coombes School in Reading. We were keen to learn about their outdoor learning and outstanding ethos. During this time the school was also involved in developing an action research project on delivery of maths outdoors. A great deal of the work was shared nationally and written up as part of the creativity programme for Scottish Schools. 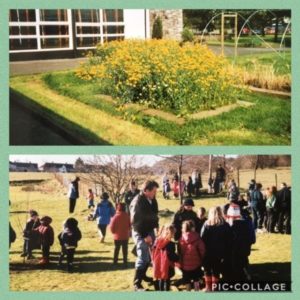 When I arrived at Inveraray one of the first projects we looked at for building community and for celebrating the outdoors was national tree dressing. Tree Dressing Day falls on the first week end of December and follows traditions from all over the world. We introduced this in 1998 and used the event to plant a tree in memory of Annabel. This was significant as it brought a difficult year for the school to an end and to celebrate new beginnings. It also signalled the importance of our environment and our culture.

This first introduction ensured that we actually got out into the grounds and celebrated the grounds as part of our learning estate. 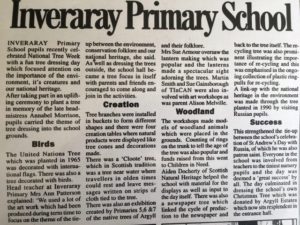 The interest in working outdoors had been established and 1999 Inveraray Primary School began the journey of developing its school grounds with support and funding from Scottish Natural Heritage. I worked with Dan Hunt and Fergus Younger of Scottish Natural Heritage to take forward a project based on developing our school grounds.  The purpose of this was to ensure learning and teaching outdoors was as accessible as learning and teaching indoors. Staff, learners, families and community members were all involved in the project and local businesses, landowners and local contractors helped with some of the changes. The school and the grounds were often used as training resources for initially local school but the interest grew and schools from far and wide visited. Some of our young people became amazing tour guides and extremely talented young naturalist. BBC landward programme came and filmed the work at the school and the children had a fantastic time learning about the media at the same time. The subsequent improvements to the grounds and local biodiversity prompted the school to begin its journey towards an Eco-Schools Scotland Green Flag Award.

As time moved forward Forest School activities are also undertaken within the school grounds for pre-five and primary one learners and are supported by the staff, parents and the janitor who have been trained as forest leaders. Inveraray Primary School also had an established programme with Crofting Connections.

I also took part in an international study visit to Menorca on behalf of ADES.  This opportunity was important in ensuring my vision for Education was based on a local, national and international knowledge.  This has remained important throughout my career to be outward looking. May 2001 Menorca visit Menorca an important feature of this visit was the importance within the education system of the natural and cultural heritage. Important aspects that reflected on Inveraray Primary. My exchange partner was Rafael Cortes who was head Teacher of CP Joan Benejam in Citudella. The school had so many similarities to Inveraray including the parent partnership, children ownership of the curriculum and cross curricular developments. I was so impressed by the child centred learning and was at a more developed stage than in our own school. This then was a catalyst for how we could improve the child centred learning. In Menorca the Council owned old farms which surrounded the towns and were set up as camps for the children to take part in environmental activities. All children for the age of 3 had 2 overnight camps each year. We visited one of the classes on their camping trip and I have still the memory of the fun and learning these children were having. There was a huge national commitment to the environment and the promotion of this in the schools. This trip was another outward looking experience which impacted to the life of Inveraray Primary. 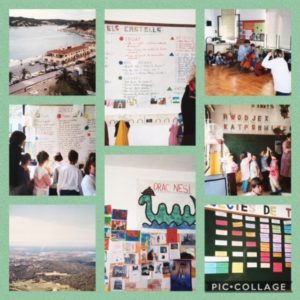 The nursery at Inveraray had been established and I enjoyed working with the team to take forward a play based curriculum and again there was a great emphasis on the outdoors and the potential for learning.

The school was inspected in 2006 and the following were identified as particular strengths of the school:

The curriculum was seen to be innovative and my contributions as leader of the school were recognised in the award of Scottish Head Teacher of the year in 2006.  I went on to be a finalist in the national awards in London.  At this national event I not only represented Argyll and Bute but also Scotland.  I was very proud and humbled to have been nominated by the team in Inveraray Primary. A very special celebration was held for a very special school community. After the event many visitors came to Inveraray School to share our good practice. This was a real high point of my career and one that remains very special.

It was very fitting that on Monday 14th December the current school team gave me a very fitting send off with lovely gifts and Caroline Wood, ASN Assistant presented me with a lovely bouquet which was very fitting as she was in my very first class in Inveraray in 1984. 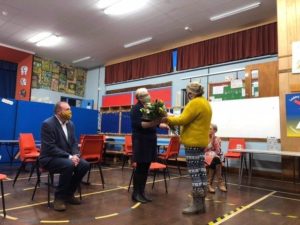