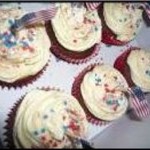 Both XL Groups in 3rd year at Oban High School have recently worked together in planning and organising a Coffee Morning for the welcoming of our American visitors.  As this is the 20th year of the Oban/Laurinburg exchange they wanted to make it special.  The group worked together in ensuring that the Americans first impression of Oban High School was as warm and friendly as possible.

END_OF_DOCUMENT_TOKEN_TO_BE_REPLACED 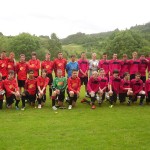 On Thursday 21st June Glencruitten Hostel held the annual Robert McLaren memorial football match. Kinlochleven travelled to Oban to play against the Glencruitten Hostel team, a good game was had by all and the hostel boys ensured the trophy stayed with them for the second year running.

The match was held to commemorate the life of Robert McLaren, a former hostel and Oban High School pupil from Kintra, Isle of Mull who lost his life while serving with the Black Watch 3rd Battalion in Afghanistan in 2009. All proceeds from the day were donated to the help for heroes fund. 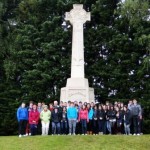 From the 10th – 15th June 2012, 40 S4 pupils from Oban High School took part in the school’s annual Battlefields Trip.  The pupils visited a variety of sites associated with the First World War including the best preserved trenches on the Western Front at Sanctuary Wood, near Ypres, the famous Thiepval monument at the Somme and on the last night they attended the Menin Gate ceremony and laid a wreath in memory of those who had died during the Great War.

END_OF_DOCUMENT_TOKEN_TO_BE_REPLACED 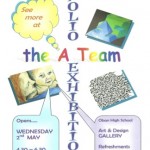 OHS Art Department is pleased to invite you to our Advanced Higher Folio exhibition. It’s WEDNESDAY 2ND MAY from 4.30 till 6.30 in the art dept Gallery…refreshments provided…….. and the exhibition will be up for week afterwards. Please come along and enjoy the work!

END_OF_DOCUMENT_TOKEN_TO_BE_REPLACED 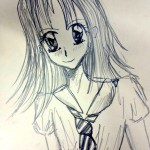 Manga: food, mineral or comic? Not sure of the answer? You’re missing out on a whole world of possibilities when it comes to literacy and young people. Manga quite simply means “comics” in Japanese and is a term applied to an international market with a huge influence, especially when it comes to teens. Much of Manga’s growth in popularity is down to the impact of Anime films and series (Japanese animations). If you haven’t already, check out some of the visually stunning Studio Ghibli productions like Howl’s Moving Castle and Spirited Away. Here at Oban High, we’ve been harnessing the popularity of this genre in building a new and thriving club. END_OF_DOCUMENT_TOKEN_TO_BE_REPLACED 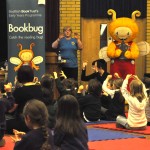 Oban High, Early Years Team, Oban Library and CAST offered Lorn cluster schools and playgroups the chance to take part in the ‘Oban High Book Week’ held in February 2012. CAST offered spaces to pre-school and P1 & P2 children in Bookbug song and storytelling sessions lasting approx 50 mins. During each session we covered 8 songs and two stories delivered by the fabulous visiting storyteller Andy Cannon. CD’s and word sheets of the songs were sent out early January to allow schools to practice before the big day! END_OF_DOCUMENT_TOKEN_TO_BE_REPLACED