P6/7 are learning about averages.   An Average is when you find the middle amount of something.

By Elizabeth and Annie

How to make a Commonwealth piggy bank.

What you will need:

First get a  balloon  and  blow it up.

Next dip newspaper in to paste.

Then stick the newspaper onto the balloons.

After that put coloured paper on it.

Finally  wait for it to dry.

By Freya and Rhys

P6/7 were doing Fair Trade tuck because this week is finance week, and we were learning about Fair Trade and how it is better.  Fair trade is good because more of the money goes to the person that produced it. We also did some money for finance week.   On Monday we had hot chocolate, and it was yummy.  On Tuesday we had hot chocolate and coconut crunch.  It was the best coconut crunch I have ever had.  On Thursday we made chocolate crispy cakes.  Today we sold some fair trade foods at the Gaelic cafe. Everyone enjoyed it and we had great fun.  So buy Fair Trade!

By Ciara and Annie. 🙂

Annie, Anwen, David, Torin and Oliver took part in the euro quiz.  The euro quiz is all about Europe and people from all of argyll entered it.  They spent all morning doing the quiz.  They had been practicing all month and had found a lot of facts.  A week later they found out there results.  Port Ellen had came second in all the schools that had entered.  They were very happy when they found out.

P 6/7 are doing a new topic on crofting.  They are going to be taking over the croft and planting new things.   They haven’t started yet but they will be starting soon.  They are doing crofting because the crofting needs done and that is what the teacher chose. 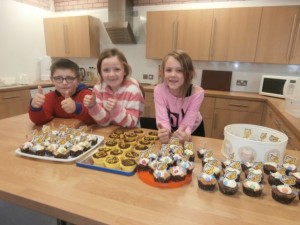 On Friday it was Children in Need and the school raised £263.46. The whole school was wearing their onesies or pyjamas.  Even the teachers.

At the end of the day we had a talent show and a lot of people entered and we ran out of time so some people could not do there act, tell a joke, play an instrument or do a song or dance. 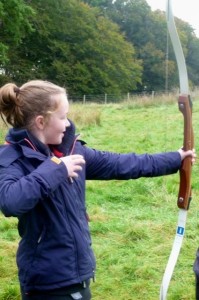 On Tuesday 24th September Port Ellen primary school and other schools met at Port Ellen pier to go on the ferry. When we got off the ferry we went on the bus and went to Oban for Stramash. When we got there we did some archery. It was funny when Elizabeth pointed the arrow to the teacher and the teacher thought she was going to shoot it at her! After that we played a game and we had to split the group in half. We had a challenge and the other team won and the next time we did it my team won. We all had a great time and we didn’t want to go.